The Science of Motocross Training, Arm Pump and Lactate Metabolism

The 2017 Monster Energy Supercross season has started.  This past weekend, Ken Roczen took a well-earned first place finish at the season opener in Anaheim, CA.  If you’re a follower of Supercross and watched the main event, you probably also noticed the slipping performance of Eli Tomac.  He started out in second… fell to third, then fourth… and ended up in fifth place, just ahead of Cole Seely.  According to RacerXonline.com, Tomac stated he was suffering from an “intense case of arm pump.”

For Tomac fans, this was tough to watch.  And ever since his shoulder injury at the Thunder Valley MX in 2015, we’ve been waiting patiently for a comeback.  This race led into a conversation I had this morning with UC Berkeley alumnus and lactate metabolism expert, Dr. Jack Azevedo of California State University Chico.  We speak regularly about many things, motocross training being one of them. To give credit where credit is due, I became really interested in motocross because of him.  Racing is part of his lineage, plus, he uses motocross training as a teaching point within his lectures on fuel metabolism and muscle physiology.

“Did you happen to watch the first Supercross race?” he asked me.  “Did you hear Tomac’s comment? Apparently there was a Science of Supercross segment.” NO WAY…

After further discussion, I was fueled by the anticipation to analyze/correct the miscommunication of physiology concepts that we work extremely hard to clarify. I immediately began an internet search for the video and found it on Vital MX:  “The Science of Supercross: Episode 1 – Cardio Training.”

Did they get it right? Well, partially.

Bottom-line:  I am somewhat disappointed.  I would have thought John Tomac to have a better understanding of exercise physiology and training, considering his professional accolades in mountain biking.

Furthermore, another episode featuring Kawasaki rider Josh Grant and Dr. Jon Bodnar of the Alpinestars medical team, discussed the causes and performance ramifications of arm pump. The video contained an animation of an arm with the words “lactic acid” right next to it.  Time and time again scientists like Jack and I are reminded of a recurring fact:

“Professional athlete” does not translate to “physiology expert.” And this is OK.

This statement is in no way attempting to discredit the Tomacs’ (or any professional athlete’s) knowledge of bicycle and motorcycle racing. Clearly they are doing something right – very right. However, the science presented in these video MUST be corrected.

FACT: Muscles will not “lock up” when lactate is produced, as John states in the video.

Lactate has had to overcome a bad reputation in the world of sport. Even now, people still incorrectly refer to it as “lactic acid,” a molecule providing no purpose but to be a nuisance to functional exercise metabolism and recovery. But, lactate is not something that accumulates in muscle tissue, nor causes that post-workout burning sensation people erroneously attribute it to.  It actually serves many beneficial functions, and has been shown to be a preferred fuel source for muscles during hard efforts.  (For a mroe thorough explanation of lactate metabolism, check out this article on truPhys.com: Lactate… The Math, The Myth, The Legend.)

“Lactate efflux from muscles is related to exercise intensity, NOT anaerobiosis,” states Azevedo.  Studies show a clear dissociation between blood lactate accumulation and intracelluar partial pressure of oxygen (PO2).  In the figure below, you can see as PO2 drops, lactate efflux from muscle tissue does not change.  Only when VO2 reaches ~65% of maximum does lactate release into the blood begin to increase, however, PO2 remains constant. 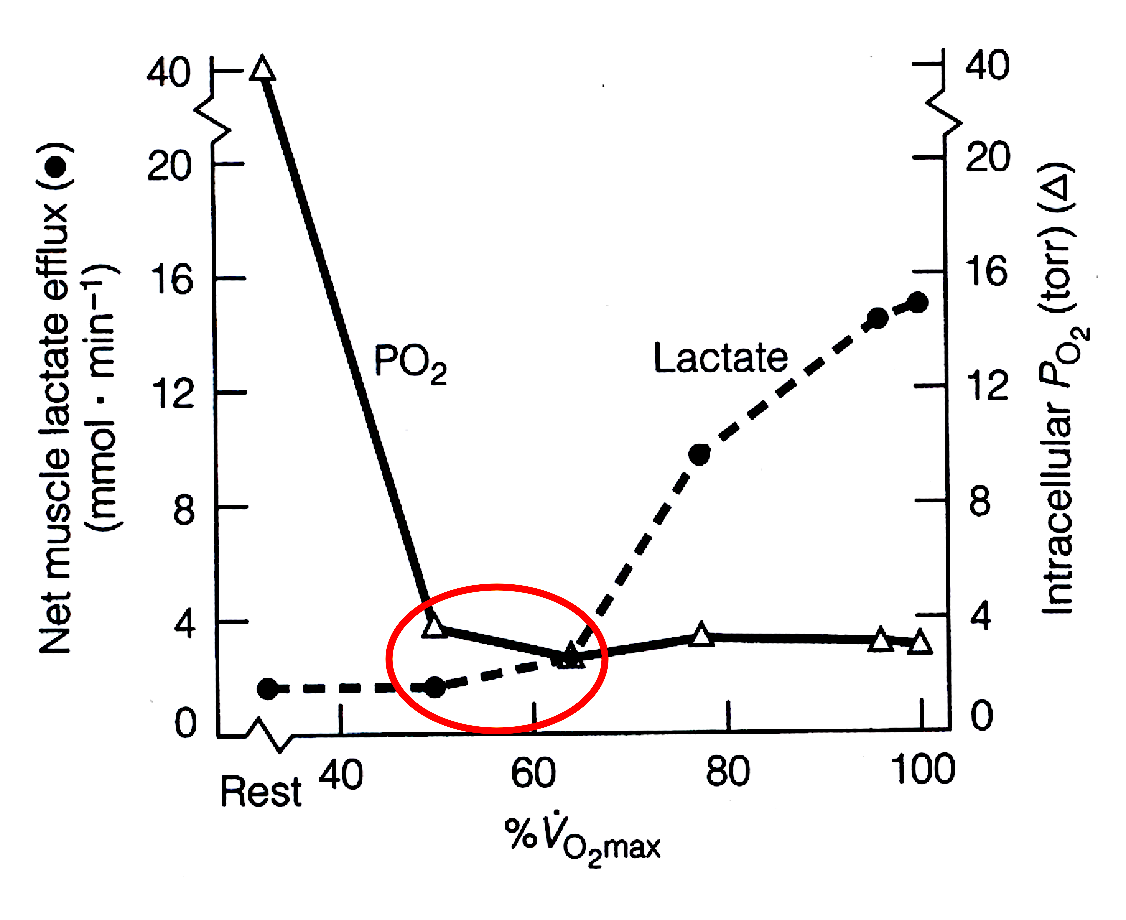 When glycogen (the stored form of glucose) is broken down, it is done so without the need for oxygen.  Furthermore, when glycogen is the initial source of carbohydrate during high-intensity exercise, lactate is the final product.  It can enter the bloodstream and be “shuttled” to and be taken up where it is needed – working skeletal muscle, the heart and the brain.  It serves as a fuel source.

In fact, when blood lactate levels increase, it is preferred over glucose and fatty acids.  A study completed in 2002 by Dr. Benjamin Miller of the University of California, Berkeley, concluded the following: when lactate is infused into the blood in high concentrations, it was found that working muscles take up lactate preferentially to glucose.  To further support these results, check out this study on carbohydrate sports drinks and performance, conducted by Azevedo and his team at CSU Chico.  They found significant increases in performance when a drink containing a lactate-polymer is used vs. a drink without lactate.

More than 90% of lactate is oxidized as fuel.  In addition, as metabolic rate increases, so does the rate of lactate oxidation, according to research conducted by Dr. Robert Mazzeo, University of Colorado, Boulder, in 1986!  Furthermore, the liver is able to convert lactate into glucose. During recovery, lactate is used to replenish depleted glycogen stores (this is called the Cori Cycle).

FACT: Training will increase the amount of glycogen that can be stored in skeletal muscle and the liver. In return, more lactate is released during exercise, and and more can be oxidized used in the ways mentioned above.  Furthermore, the rate at which is lactate is oxidized also increases, so blood levels of lactate will decrease more quickly. 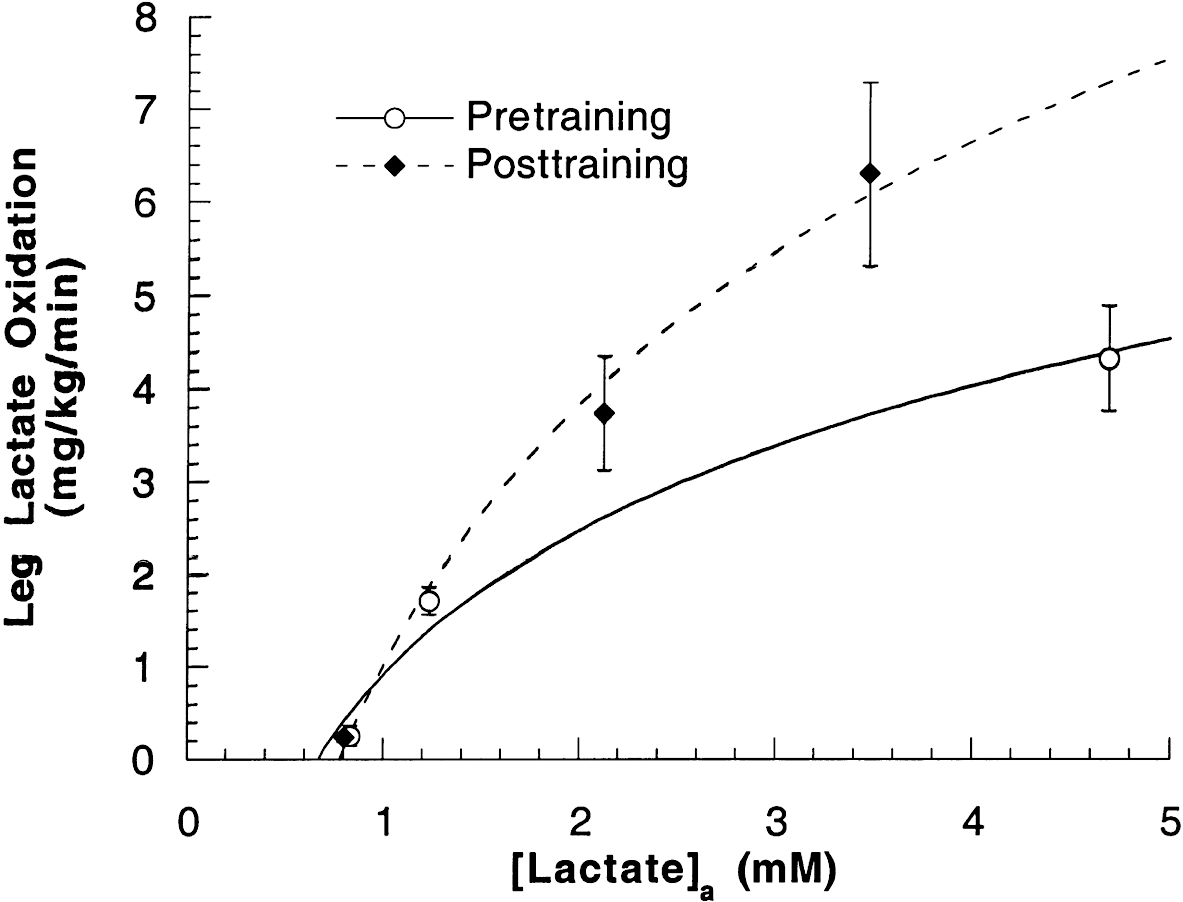 Lactate oxidation in the leg after endurance training in men. Bergman, B. et al. JAP, 1999

FACT: Mountain biking worked for John… because he was a mountain biker.  This is NOT stating that development of endurance and power through cycling isn’t vital to obtaining the necessary fitness to perform on a motorcycle.  This is stating that incorporating 3,000 ft climbs into a regular training plan will make Eli a great climber – a fit cyclist.  Specificity of training is key. If you want to run well, you need to run.  If you want to ride well, you need to ride.  A good motocross training plan has many variables within it, but clarification of these principles are still important.

FACT: Arm pump is not caused by “lactic acid” build up – this is erroneously shown by the episode discussing the syndrome.  As explained earlier, lactate metabolism is still haunted by its misunderstood past. Discard the term “lactic acid” if it is something you are still hanging on to. Now, what type of explanation are you left with?

Arm pump has several integrated causes.  It can be attributed to overtraining, as well as poor physical and mental conditioning.  The psyche plays a major role in the physical ramifications of syndromes such as arm pump. To reference a comprehensive article I wrote on the causes and treatments of arm pump:

“The physiological loading is a major response to the concentration, arousal, and emotional intensity required to perform the sport.  At gate drop during a motocross race, there is a surge in catecholamine (epinephrine and norepinephrine) and cortisol levels in response to the mental demands to get out ahead of your peers, then push through, maintain confidence and a competitive edge, be rad, and win safely.  Then, add in the following thoughts: “What is the obstacle in front of me? Who is behind me? How close are they?”

If the forearm musculature is not conditioned to sustain the physiological demands placed on it during performance, it will ultimately suffer. Sustained isometric contraction of the forearm muscles not only leads to fatigue, but it also prevents blood flow in and out of the forearm compartment. 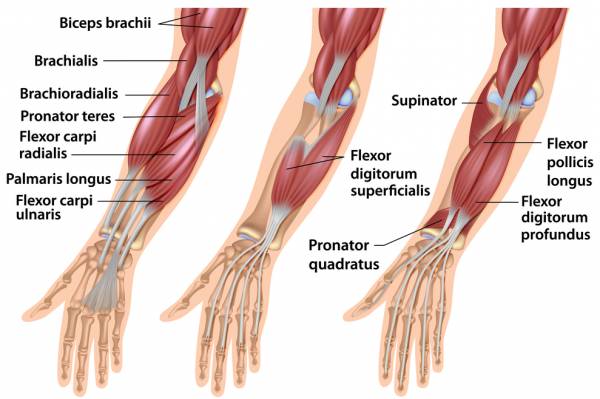 Anatomy of the forearm musculature.

“The forearm compartment can easily build up pressure due to edema, hypertrophy and blood pooling. Elevated amounts of intracompartmental pressure lead to pain – the fascia enveloping the muscle becomes too tight, as it is not elastic. This additionally leads to transient ischemia (inadequate oxygen supply), compromising metabolic performance.”

Ultimately, science is for the experts.  Coaches need to be educated by the scientists.  Athletes need to perform, educated by coaches with an updated and accurate foundation of physiological functionality.  It’s a win for everyone.

Herbold, J. L., (2016, July 1). Handlebar grip, arm pump and forearm fatigue: why and how to alleviate it. Retrieved from: https://truphys.com/handlebar-grip-arm-pump-forearm-fatigue/