As a simple and somewhat ignorant statement, I would say that I support the Patient Protection and Affordable Care Act (PPACA or simply ACA). I am going to assume many others support it based on the same ideals: that that everyone deserves medical coverage.  Without diving into reputable literature, on the outside it seems like the legislation written into the ACA would fit the bill (no pun intended). After more thought, quality reading, and good conversation with well-versed individuals in my circle of colleagues, I am now at least more informed and am able to establish a personal platform on the piece of legislature.

BLUF: Those idealistic, fundamental attributes necessary for the change many of us are seeking are absent.

The ACA is a national healthcare reformation that was signed into law in 2010. The legislation encompasses many changes, to include expansion of healthcare coverage to many uninsured populations, assist in controlling the increasing costs of healthcare and give incentives/tax credits to businesses who provide health insurance, and additionally mandated that all citizens be covered by either federal or privatized insurance. Another priority of the act is improvement in quality of healthcare delivery through funding of clinical research.

The many aspects that comprise the healthcare industry are undoubtedly intertwined, and overall, impossible to separate: insurance, hospital billing/revenue and “big business”, patient costs, and Medicare/Medicaid as well as other government funding. The ACA is only responsible for a part of this business, however, all aspects affect costs placed on the shoulders of individuals.

The trend for health systems to acquire physician practices has the potential to raise prices, particularly under the current volume-based fee-for-service system. The #1 healthcare corporation, HCA, is for-profit, and made $38 billion in revenue in 2013. In addition, the acquisition of hospitals by large corporate conglomerates like HCA, St. Luke’s, Tenet, and many others, increases premiums for consumers, decreases wage growth for employees, and controls competition in the market.

I took the time to discuss this with a friend of mine, James Plummer, a physical therapist in Oroville, CA who owns his own practice. “The implications of this will shape the industry to its core,” Plummer stated. “As innovation is stifled in favor of volume, the cost per case will rise. The service for patients will be sacrificed. Small independent providers (full disclosure: that means me) will get squeezed like a mouse from a boa. If the novelty of independent doctors survives it will only due to a dogged determination to serve the patients and not the bottom line of a large corporation.  As an example, try asking for a write off, discount or payment plan from a private provider and then try to get the same from a large hospital system.”

So… the ACA. The portion of our GDP that stems from the healthcare industry: nearly 17 percent. Healthcare spending by the federal government totaled $3.0 trillion (or $9,523/person) in 2014. Interestingly enough, $329.8 billion of this was due to out-of-pocket costs. The ACA will increase taxes by $569 billion by 2019, while STILL leaving 21 million Americans uninsured (which in the future, may be a younger and healthier population than previous). And what does all of this legislation do about insurance costs? Not much – they are not really reduced. In fact, because the ACA’s legislation has a ban on medical underwriting, it now requires insurance to accept those with preexisting conditions and premiums are lowered for older populations. In turn, premiums are actually rising for younger, healthier individuals – about 17 percent. 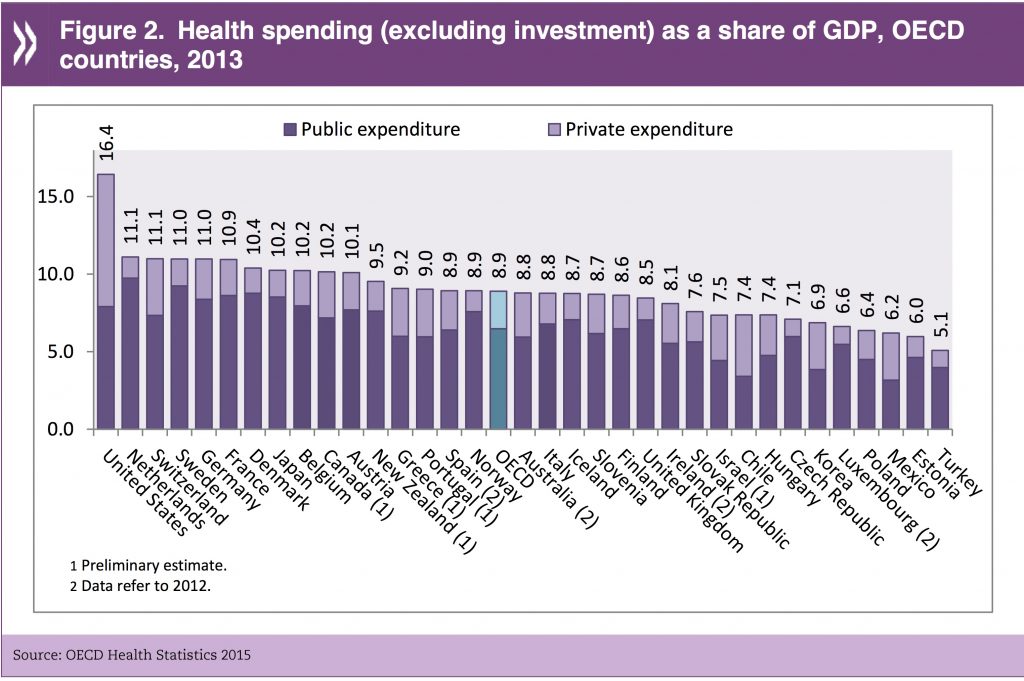 Many people misconstrue the idea of universal healthcare with that of the ACA. The ACA is not universal healthcare. It will definitely expand coverage, however, as mentioned above, there is a part of the population that will still remain without insurance. The expansion will include non-Medicare-eligible individuals who have incomes up to 133% of the poverty level, and the federal government will fund 100% of states for these particular individuals until 2020. Federal medical assistance percentage (FMAP) is required to be about 50%, and in low income states is in the 70 percent range. Considering Medicaid comprises $1 of every $6 spent on care in the US, and FMAP will fund dollar-for-dollar, this can often prove difficult in economic downturns, as we saw during the Great Recession. Because Medicaid is a countercyclical program, spending increases in times of economic loss, and state revenues decline simultaneously – therefore, a mismatch happens and federal funds allotted to the states affected must increase. With an increase in FMAP to 100% under the ACA, this mismatch may be enhanced.

One thing we are familiar with is the tax penalty on those individuals who fail to sign up for coverage, as well as a raise in Medicare Part A taxes (Part A is Hospital Insurance). And, it’s not just any coverage. The ACA mandates that insurance meets “minimum essential coverage,” which means plans have to cover things such as rehabilitation services and pediatric care. Medicare Part A funding is deducted as part of payroll taxes and put into the Medicare Trust Fund. The amount of increase will be from 0.9% to 2.35%. (Who does this effect… is it based on income?)

According to the Kaiser Family Foundation, Medicare and Medicaid comprise 23% of the domestic program federal budget. Since implementation of the ACA, this has grown and will continue to grow as coverage is expanded. In addition, healthcare costs continue to rise. If insurance premiums don’t really change for the individual (and go up for younger populations), and hospitals are being consolidated into large corporate, revenue-making machines, swooping up private practice and limiting competition… where is the ACA in this? And if businesses shoulder the burden to provide insurance for employees, they in turn increase prices, lower other benefits for their workers, and cut wages. Overall, to the taxpayer, these things need to be addressed much more appropriately, and the ACA has failed to do so.

Snyder, L., & Rudowitz, R. (2015, May 20). Medicaid Financing: How Does It Work and What are the Implications? Retrieved April 19, 2016, from http://kff.org/medicaid/issue-brief/medicaid-financing-how-does-it-work-and-what-are-the-implications/