Home Healthcare (and Some Politics) Social Media and Healthcare: A Storm?

Social Media and Healthcare: A Storm?

Social media is the most modern form of mass communication. It’s quick, it’s personal, it can be superficial or deep. It delivers the news, however uncanny or serious is up to the author and seeker. You could consider it a platform to replace town hall meetings, public debates of various echelons, and newspapers, a more outstretched way to protest, support or otherwise offer opinion towards multiple levels of politics and individual or group values. The opportunity for quick spread of information on an international level makes social media an ideal in the healthcare industry, however, there is a shadow side, as with everything. Bias, self-control, unprofessionalism, delivery of “worthless” information – all negative implications of social media.

Dr.’s Rozemblum and Bates, with the Harvard Medical School and Harvard School of Public Health, respectively, published an article in the British Medical Journal of Quality and Safety entitled “Patient-Centered Healthcare, Social Media and the Internet: The Perfect Storm?” The BMJ is the world’s oldest peer-reviewed and internationally recognized medical journal (since 1840). The article discusses the potential for social media, the internet, and patient-centered healthcare to synergistically create a “perfect storm,” where delivery of information through this quickly evolving technological loudspeaker will create non-linear change of extraordinary scale. 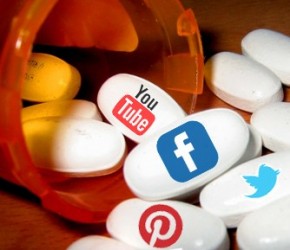 Social media, as I stated above, allows for mass access and delivery of information. Patients can now access hospital ratings, give reviews of providers, and be outspoken in public about healthcare service and their illness and coping, all through the internet. In response, many providers have put effort into becoming more patient-oriented. Social media has allowed a shift in information access, where health-related information used to be majorly available only to providers. Also, communication from patients via groups and blogs allow providers and researchers to note outbreaks of disease and health issues.

The tricky parts that come into play? Ratings, and fair access to the internet across populations. First, ratings provided by patients on social media platforms give the healthcare industry an insight they never had previously, which is ahead of traditional quality metric systems. The downfall: many personal internet-based ratings and feedback systems also contain bias. Many people that take the time to rate a business either had an exceptionally great experience or, on the opposite end, had a negative experience. For healthcare, ratings and commentary on social media and other websites, such as Yelp.com, can be compared to formal hospital rating scores. There have been several studies that found positive correlations between ratings on various internet outlets and quality control metrics performed by traditional/formal measure. However, the majority of social media and internet users are younger, and the major population expanding within the healthcare system are older (baby boomers). The researchers in this particular study conclude that caution must be used by healthcare providers – this goes without saying.

Second, 60 percent of people over the age of 18 use Facebook. There is an ever increasing utilization of social media platforms within healthcare systems. What used to be a one-way form of communication (providers > population) has now transitioned into a dialogue. For some. How do socioeconomic demographics come into play? Correlations most likely exist between low-income and rural populations who have little access to and/or ability to pay for healthcare, and lack of internet/social media access. In addition, the obesity and chronic disease prevalence within populations who have a low socioeconomic status is higher than those with higher financial and educational status, this we do know. So, considering the applicability of the healthcare system’s communicative transition to now embrace social media… part of the population who would benefit most from access to healthcare and health-related information (as well as the other things social media brings, like connectivity between those with disease, coping groups, etc), don’t have access to it.