The History of Chest Pain – A Diagnosis of the Breast

While attending a conference for the American Heart Association in March, I had an interesting conversation with my doctoral mentor, Dr. Siddhartha Angadi. We verbally meandered to the topic of cardiovascular history, discussing something I strongly believe worth sharing (you’ll understand by the time you finish reading). 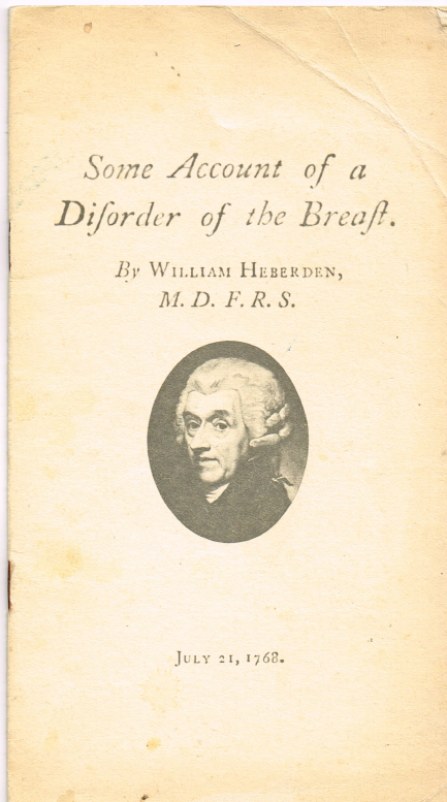 In 1768, Dr. William Heberden made a profound statement regarding the treatment for those suffering from chest pain, which he appropriately named angina pectoris. His diagnostic exploration concluded with the following statement: “I knew one [patient] who set himself a task of sawing wood for half an hour every day, and was nearly cured.”

Heberden presented his accounts of angina to the Royal College of Physicians in London, England, describing causes, concerns, risks and treatments, all in an eloquently descriptive style of speech. The article outlining his findings was published in 1772, entitled “Some Account of a Disorder of the Breast.” For more than 250 years, we have known exercise prevents and reverses heart disease. Oh, how lost we have become. Pills, cars, screen time and TV dinner.

In addition, there isn’t one simple answer to why the above statistical facts exist. It isn’t saturated fat or alcohol consumption (consider the French diet), or only genetics. However, the things we do know now Heberden wrote about long ago when medicine was beginning to find it’s way toward modernism.

Most importantly, he knew, and we still know, exercise is the best free medicine for heart health. According to the current physical activity guidelines established by the U.S. Department of Health and Human Services, adults should aim to get 150 minutes of moderate intensity physical activity per week (or 75 minutes of vigorous activity per week, whichever you choose). This guideline is supported by a rich and sound plethora of scientific data, backed by the American College of Sports Medicine, the American Heart Association, Centers for Disease Control and Prevention, the Surgeon General, among others.  In 2010, only 43.5% of Americans met the target amount of activity for health.