During his 2016 campaign, I read an article in the Washington Post explaining how Donald Trump still believes that vaccinations are to blame for autism in children. Why this was even a topic of his campaign is of question, but it was nonetheless.  Furthermore, at the rate the media was prospering from his strong personality (including his popular Twitter feed), this common misbelief is going to be even harder to eradicate. Politics are like religion, and therefore “science” often follows suit.

Support to vaccinate or not to vaccinate is, of course, up to every parent, as they have an inherent right to choose what they believe is best for their children. But what is greater and more important than the individual belief is a worldly perspective based on factual education, and it is unfortunate that anti-vaccination propaganda and fraudulent scientific claims supersede evidence supporting the magnanimous benefits of vaccination over its risks.

A retrospective cohort study published by a group of Danish researchers in 2002 conducted an analysis of more than 500,000 children born in Denmark between 1991 and 1998, investigating whether or not there exists an association between administration of the measles, mumps and rubella (MMR) vaccine and development of an autistic disorder.  They found no such association.

Another study published in April 2019 by some of the same researchers conduced a very similar analysis, this time in 657,461 children born between 1999 and 2010.  The researchers took into account risk factors for autism, other vaccines, birth year, age and sex. “Overall, there was no increase in the risk of autistic disorder or other autistic-spectrum disorders among vaccinated children as compared with unvaccinated children.” The “study strongly supports that MMR vaccination does not increase the risk for autism, does not trigger autism in susceptible children, and is not associated with clustering of autism cases after vaccination.”

So why is there any confusion?

The Lancet is one of the oldest and most highly-regarded medical journals. It is both above and among the likes of the BMJ, Cell, Science, Nature, Journal of the American Medical Association (JAMA), Journal of American Physiology (JAP)… all the places researchers dream of being published.  The places where good science goes to thrive. Except in extremely rare instances like… this. 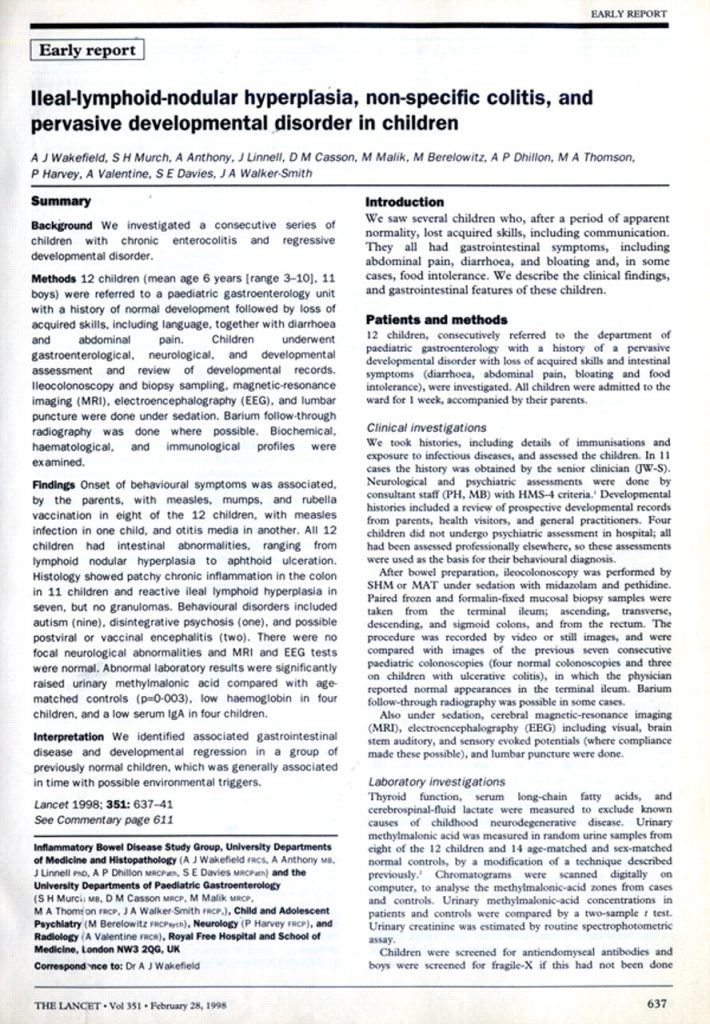 One article started it all.  In 1998, a gastroenterologist named Andrew Wakefield published a now-famed study in The Lancet, claiming measles, mumps and rubella (MMR) vaccinations led to the onset of autism and gastrointestinal disorders in his 12 participants.  The average age of the participants was nine years, and 11 of the 12 children were boys.  The study, Ileal-Lymphoid-Nodular Hyperplasia, Non-Specific Colitis, and Pervasive Developmental Disorder in Children, was written by 13 researchers in total.  Interestingly enough, the original article does state the following, but obviously it got lost in the mix after their conclusions:

“We did not prove an association between measles, mumps, and rubella vaccine and the syndrome described. Virological studies are underway that may help to resolve this issue.”

In 2004, 10 of the 13 authors of the controversial article published a statement in The Lancet (Wakefield was not one of those 10), retracting their original claim and the response of the population that followed:

“We wish to make it clear that in this paper no causal link was established between MMR vaccine and autism as the data were insufficient. However, the possibility of such a link was raised and consequent events have had major implications for public health. In view of this, we consider now is the appropriate time that we should together formally retract the interpretation placed upon these findings in the paper.”

It took an additional six years (2010) for The Lancet to finally retract the paper.  Investigations conducted by the likes of Brian Deer and the General Medical Council found ethical and scientific fraud littered throughout the study:

In 2011, the BMJ published an editorial additionally discussing the investigation that led to the retraction of Wakefield’s article.

The fraudulent nature of the MMR claim was massive and unexpected enough that the New York Times gathered their own archive of various articles covering it, and the BMJ can be credited with open pursuit of fixing the misbelief that resulted from the bad science.  Not only did the original findings have celebrity endorsement,  they fueled parents to retaliate against many different vaccinations for their children (not just MMR), referring publicly to Dr. Wakefield as “a hero.”

For a revered journal to come back and say… “Oops…” after such a resounding response is a nothing short of a BIG deal. Faith is lost. Belief in science is confused and compromised, and as stated above, people believe what they want as “science” because it is what is delivered to them as educational content, regardless of fact.

As a result, immunization rates plummeted because of Wakefield’s inaccurate claim.  When vaccination rates in communities fall below ~90%, herd immunity is compromised. (Herd immunity is the establishment of acquired protection from a disease based on the high immunity rates among a community or population). Unvaccinated people who would typically be protected by the community become susceptible, and the disease is able to spread.  This has dangerous implications for public health.

Vaccines do not cause autism.

Autismspeaks.org is the world’s leading autism advocacy and science organization.  As of March 2015, their vaccination policy states simply this:  “Over the last two decades, extensive research has asked whether there is any link between childhood vaccinations and autism. The results of this research are clear: Vaccines do not cause autism.”

A blog article on Just the Vax lists 107 studies that conclude no relationship between vaccination and autism. (I am impressed by the tenacity of the author to compile all of this!)  The studies have been published in highly-regarded, peer-reviewed medical journals, to include Pediatrics, the Journal of American Pharmacist’s Association, Journal of the American Medical Association (JAMA), Annals of Pharmacotherapy, and the BMJ.

A meta-analysis, conducted at the University of Sydney in Australia (an internationally recognized institution and the “Harvard of Australia,” if you will), looked at more than 1.2 million children, concluding that there is no link between autism and vaccination.  1.2 million children.

Wakefield’s singular and ethically fraudulent study consisted of 12 children. Yet, what do people still choose to believe?

New meta analysis confirms: No association between vaccines and autism. (2014, May 19). Retrieved from https://www.autismspeaks.org/science/science-news/new-meta-analysis-confirms-no-association-between-vaccines-and-autism

75 studies that show no link between vaccine and autism updated to 107. (2014, Mar). Retrieved from http://justthevax.blogspot.com/2014/03/75-studies-that-show-no-link-between.html