June 26, 2019 December 1, 2020Clinical and Disease, Exercise and Fitness, Healthcare (and Some Politics)

While employed at Abrazo Arizona Heart Hospital, I became increasingly fascinated with the physiology behind cardiac dysrhythmias and ECG diagnostics.  The great thing about a telemetry gig: each 12-hour shift is different – for those with inquisitive, analytical personalities, it feeds your need. Because the hospital specializes in heart and vascular treatments, each day would bring its own challenges. As patient statuses change or someone arrives through the ER, they have surgery or a procedure, anything can be expected.  To be successful, it is necessary to consistently research information to improve proficiency – in journals, textbooks and self-study websites, discuss information with peers and nurses to expand all efforts to do a great job, and in turn, pass along new knowledge to help the staff.

The experience prompted me to start compiling an ECG Knowledge Bank – a list of websites deemed worthwhile for all of those hard working folks in healthcare, academia, cardiac rehabilitation, firefighting – anyone that needs to obtain or maintain a thorough and accurate understanding of rhythm diagnostics.  There is also discussion section on tricky rhythms and ways to differentiate them, as clinical reality is quite different from a textbook. This is a long term work in progress – there will be updates, so save the link if you find it useful, and please contact me if there is something you’d like to see added or expanded upon. Cheers!

When you just can’t put your finger on it… we attempt to. (click each topic to jump to it)

A few times I have found myself thinking this very question.  Of course, it is very important to get it right because the underlying cause of each is completely different.  We know atrial flutter has a distinct sawtooth F (fibrillation) wave morphology, but so does coarse A Fib (F waves are >0.5 mm). In addition, sometimes atrial flutter can have an irregular heart rhythm (called atypical atrial flutter), where R-R intervals are not equal, and there is a varying number of F waves between each QRS.  So it can be easy to confuse the two. Multifocal atrial tachycardia (MAT) is also typically irregularly irregular, with at least three different P wave morphologies and PR intervals. To figure it out:

A: Atrial flutter with a variable AV block. B: Coarse atrial fibrillation.

Tachycardia: What subtype is it reeeeeally?

There are three major classifications of tachycardia (heart rate >100 bpm), named after the origin: sinus, atrial/supraventricular, and ventricular.  It is common to label many fast atrial rates as supraventricular tachycardia (SVT).  Same with ventricular tachycardia (VT); it is used as a “catch all” name quite often.  But, some of the subtle differences are extremely important to note, and the necessity for proper identification should not come as a surprise. Here is a quick down and dirty outline, with explanations for patients without a pre-existing bundle branch block (where a wide QRS of >120 ms would be present).  There are also two algorithms at the end: one for narrow complex tachycardias, and another for wide complex tachycardias.  Click on them to open in a new window. 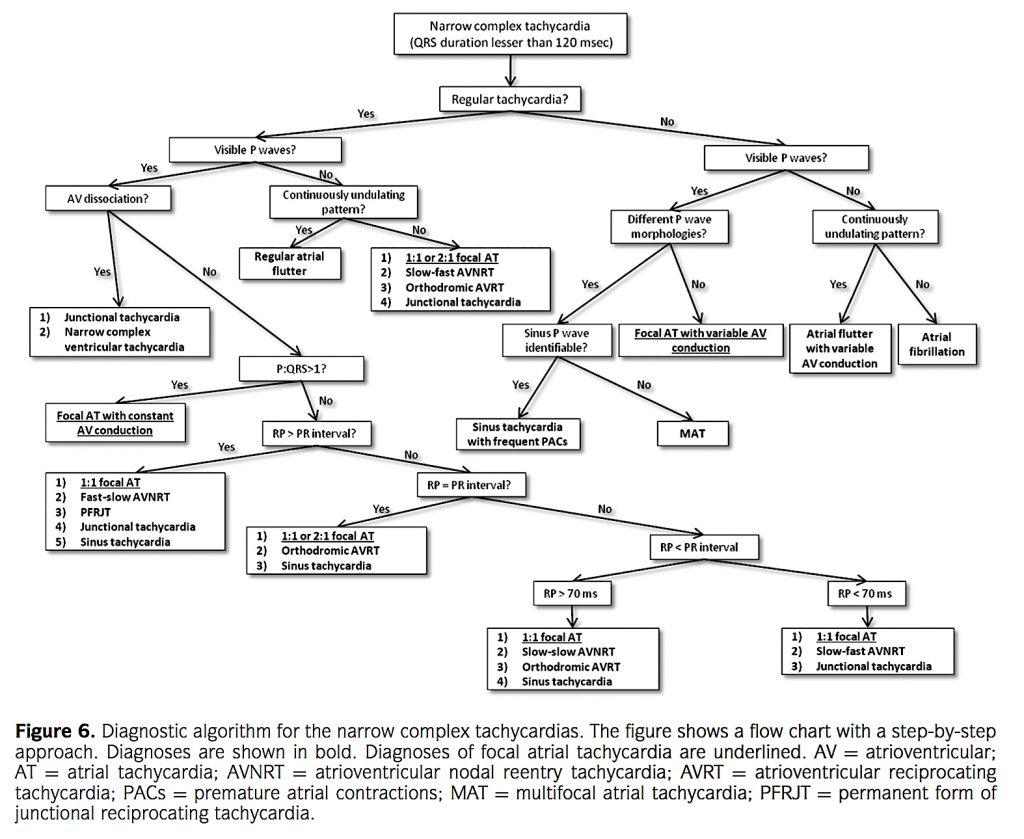 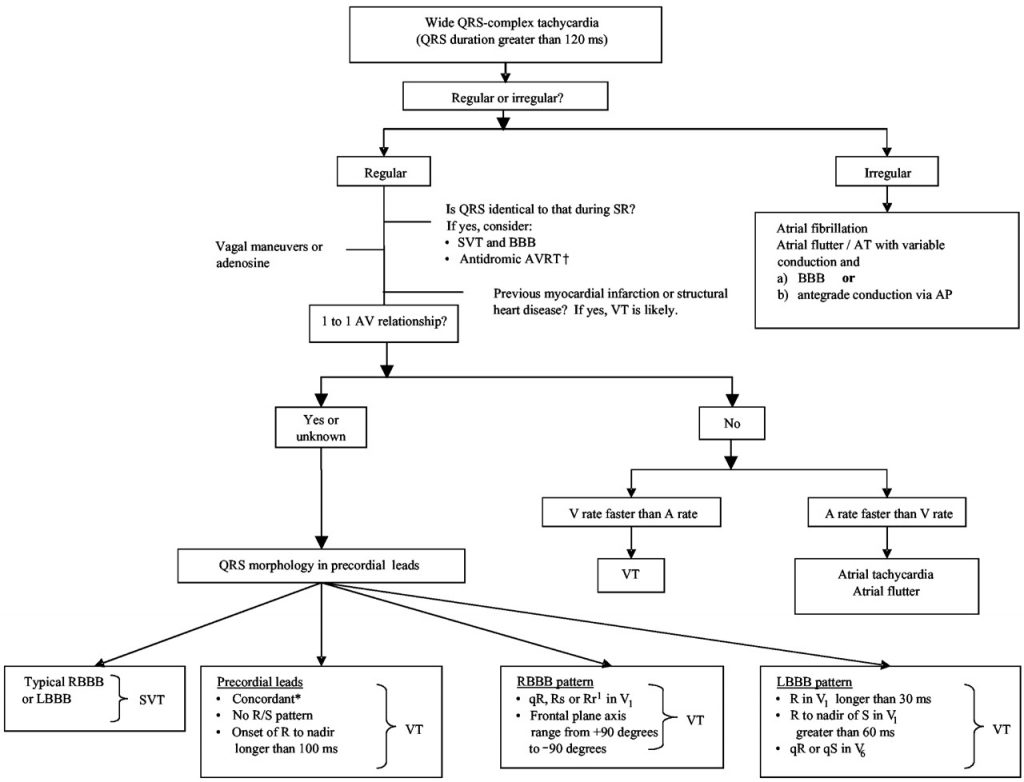 This may be trivial, but I found it interesting.  According to Dr. Kenneth D. Kronhaus, who published an abstract to the editor of the Journal of the American Medical Association (JAMA) in 1973, the proper term is dysrhythmia.  Arrhythmia means “without rhythm,” so it technically cannot be used as a blanket term, even though most of the time it is.  According to Kronhaus, “The term ‘dysrhythmia’ is not limited to irregularities of the heartbeat, but also is applied to disturbances of rate and conduction.”

Pacemakers: When they don’t work.

Tricky tricky… especially if you work at a specialized cardiovascular clinic or hospital. First, here is a link to some basics about how pacemakers work, and how normal ECG rhythms look with various types of pacemaker setups (i.e. atrial only, dual AV, whether or not sensing in triggered or inhibited, etc.) 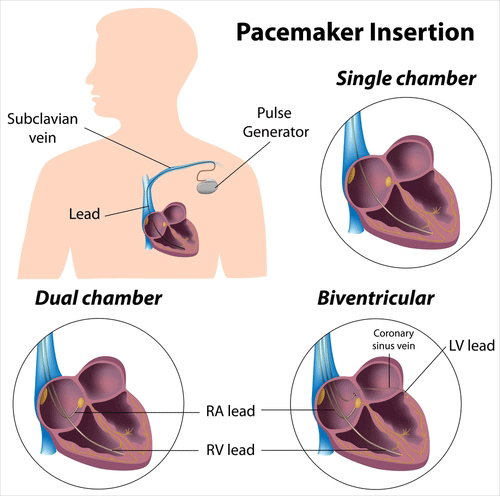 Now, here are a few common issues that happen with pacemaker malfunction, with simplified explanation:

Failure to fire/failure to pace. The device does not send an impulse where it is expected. On an ECG, a pacer spikes are missing.

Failure to capture.  The pacer fires, but myocardial depolarization does not result.  On an ECG, pacer spikes are present, but there is no electrical activity (contraction) following.

Undersensing/Failure to sense. If spikes appear where they shouldn’t, such as within or after a QRS complex, then undersensing could be the problem.  Undersensing happens when the pacemaker fails to detect the natural underlying rhythm.

Oversensing. Basically, the opposite of undersensing. The pacemaker thinks it senses natural electrical activity that is from a different source or doesn’t exist, and therefore is not activated.  The pacemaker could be too sensitive.

For more on malfunctions, such as runaway pacemaker and pacemaker-mediated tachycardia (PMT), click here.

And finally, a really cool link:  A battery-less pacemaker that regenerates its energy from the heart’s own electricity.

Can junctional rhythms have a positive P wave in lead II?

Yes, but not often, and it depends on the anatomical location of the ectopic focus.  Let’s start old, as the old research set the foundation on how we practice today.  In 1973, Dr. Kenneth M. Rosen published an article in Circulation on junctional tachycardia.   He dove into wave morphology, and referenced several previous studies on P wave morphology.  Several had concluded that rhythms which produce upright P waves in leads II, III and aVF  arise from an origin near the carotid sinus.

Another article published in Circulation circa 1973, this time by Dr. Benjamin Scherlag et al., analyzed the rhythms associated with the five pacemaker sites (at the time) located within the AV junction.  The ECG tracing associated with a focus located at the His bundle shows a positive P wave morphology:

Fast forward.  The British Medical Journal (BMJ) published an article in 2002 entitled, “ABC of Clinical Electrocardiography: Junctional Tachycardias.”  Here, only two types of JT were covered, AVNRT and AV re-entrant tachycardia.  AVNRT has inverted P waves if before the QRS, but are more often buried or after the QRS due to the re-entry circuit.  Orthodromic AV re-entrant tachycardia, as a part of Wolff-Parkinson-White syndrome, will show delta waves as an augment to the R wave until the tachy sets in, which is not to be confused with a positive P wave in leads II and III.  At the point where the tachycardia is present, no delta waves are seen, and P waves follow the QRS complex.

In 2015, Dr. Carmelo Buttà and colleagues at the Biomedical Department of Internal and Specialist Medicine, University of Palermo, Italy, did a thorough research review of atrial tachycardias. The article, published in the Annals of of Noninvasive Electrocardiology, reviewed several current electrocardiographical findings regarding ectopic atrial tachycardias, including JT and PFJRT (permanent form of junctional reciprocating tachycardia). Buttà stated that “JT may rarely present retrograde P waves before QRS complex (negative on the inferior leads and positive in V1),” the inferior leads being II, III and aVF.  This is dependent on the location of the focus, again, and a focus located near the carotid sinus may show positive P wave morphology in a junctional tachycardia.

Sometimes, it is difficult to find where the T wave ends, making an accurate measurement of the QT inveral difficult.  Variability in T wave morphology is high, with individuals having biphasic, inverted and peaked T waves, to name a few.  Then add in ST segment elevation and depression, and accurate measurement on an ECG strip may become even harder.  I’m sure I see a wider array of morphologies working at a specialized heart hospital, however, that does not make this any less important.

I found an excellent article published by Dr.’s Pieter G Postema and Arthur A.M Wilde in 2014, entitled The Measurement of the QT Interval.  By the obvious title alone, it was definitely worth checking out.  They do a nice job discussing the history, physiology and math regarding the measurement of the QT interval, going into depth re: U waves, correction factors, disrhythmias and length, and end with some tips and tricks.  Here is a link to the full article on PubMed – it is definitely worth your time.

I did want to pull out one figure in particular, as it gives a good visual of some commonly encountered T wave morphologies, and how to go about finding the end of the wave using the tangental method. 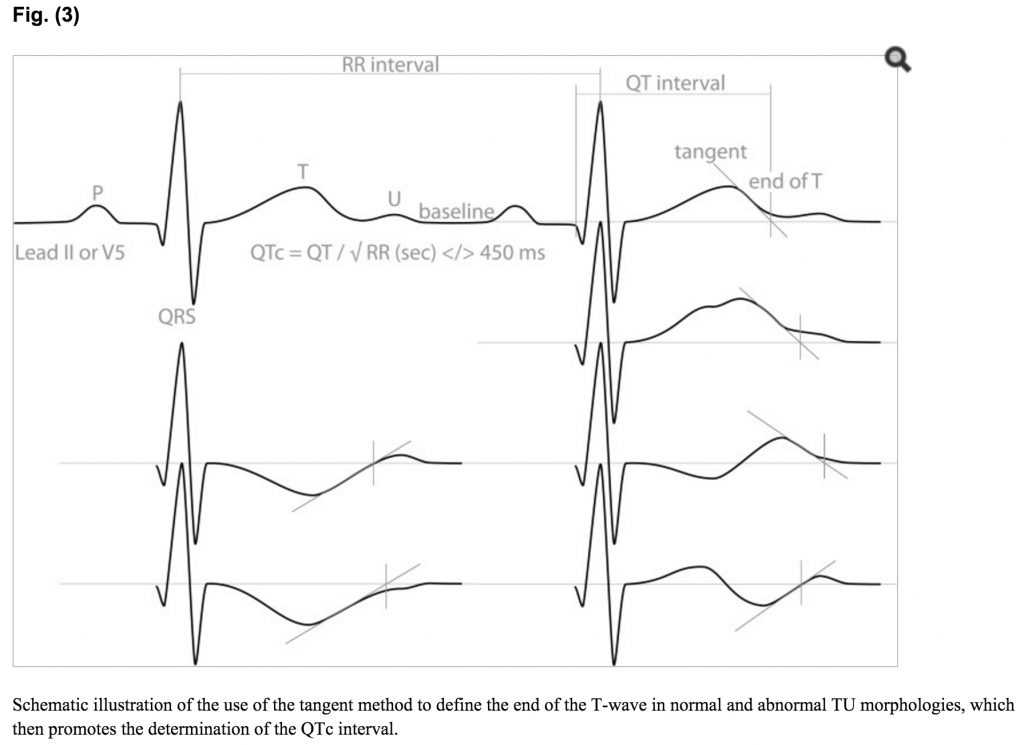